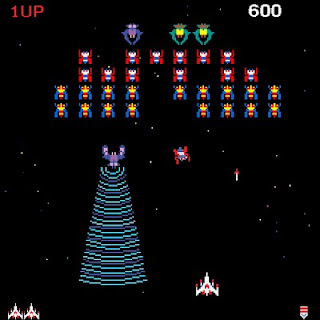 I read a new story today about an Australian fellow breaking the world's record for Galaga and it reminded me of a story early in my career:

I was working for Namco during the mid-90's and I was sent to Japan to help out with some design work on an arcade game (IIRC, it was Tekken 2)

When I got to Namco's Yokohama tower office, I was given a tour including the arcade division where I'd be helping out. Their offices were small tables (the kind you'd find in elementary schools) literally wedged between gutted arcade cabinets, filing cabinets and fire-hazard stacks of old paperwork. I had heard Japanese work spaces were small, but our American cubicles were luxurous compared to these work spaces.

In one of these tiny spaces, I was introduced to a Japanese planner ("Planner" is the Japanese term for designer) who, as I was told, had worked for Namco for "a very long time." I asked him (via translator) what games he had worked on and he listed several off including... Galaga.

I bowed very deeply to the planner, telling him how much I loved the game as a child (to the amusement of the other employees with us) and the planner made a "don't go anywhere" motion with hands as he rushed back to his "office."

He returned with a stack of yellowing graph paper which he started to flip through. After a second, I realized he was showing me the ORIGINAL DESIGNS of Galaga! It was amazing to see the whole game on paper: the ship patterns, the controls especially the famous capture mechanic!

I felt like I had been allowed to touch the Declaration of Independance of gaming. It was quite an amazing experience!

Holy Jeez! I would have totally lost it. That is one of the greatest anecdotes ever. Better even than the fact that you played Chainmail. Wow, what an awesome experience.

The only thing I have like that is when I was testing Full Spectrum Warrior at Pandemic and finished off the coffee pot only to turn around to find Warren Spectre standing behind me, mug in hand, look of "you better get to brewing" on his face.

Never did figure out what he was doing there. Some super secret project that never saw the light of day I'd assume.

Still though. Galaga design documents. Those need to be in a museum.

Awesome story! On certain days of the week, I'll tell you that Galaga is my favorite game of all-time. The pacing, particularly regarding the ship's rate of fire, is perfect and requires the player to make every shot count.

Then again, I always opted for one ship rather than two, so my opinions might not be trustworthy. :)

Yeah, it was a pretty cool experience.

Of course my first thought was to grab 'em and take off running.

My second thought was "I'm a caucasian man in Japan - I might stick out as a fugitive..."