The rise of the "digital dark ride"?

I've noticed an interesting trend lately in the casual gaming market (read Wii) that ties in nicely to this halloween season: Mature rail-shooters that are trying to capture older audiences with scary/violent content but light gameplay.

Dead Space: Extraction and House of the Dead: Overkill both take control of the character's movement and the game camera in favor of action and atmosphere. I haven't played Toy Story Mania 3D yet, but if it is anything like the Disney's California Adventure theme park ride on which it is based, it will move the player around from mini-game to mini-game. And yes, I know TSM3D isn't mature rated - but it is based on a dark ride.. more on that in a second. 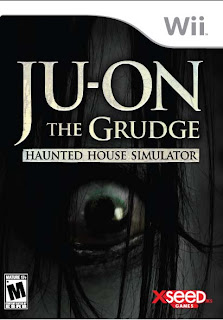 But what I find very interesting is that the creators of JU-ON: the Grudge (based on the series of Japanese horror movies) refer to their game as a "haunted house simulator" (it's even right on the box)(Side note: Their "second player mode" allows the player to scare the first player rather than help them with gameplay... a neat idea which I am curious to see how it is executed.)We all know that one of the gating factors of a video game is player skill. If skill is removed from the equation, will it make it more appealing to players who are normally turned off by lack of skill? does it still make it a "game"? or is it something else... like a "digital dark ride"?

You could argue that the "dark ride as game" concept has been around ever since Castle Wolfenstein 3D or Myst. Anytime the camera is used as a stand-in for the player, the game becomes about the emotion of the player rather than any skill (other than shooting).

As someone who takes inspiration from dark rides and haunted houses for level design, I find this "haunted house simulator" concept intriguing. Just how much "game" is required to qualify it as a game? I've been quoted on saying that Disneyland's Haunted Mansion is one light gun away from being a first person shooter, but what about the opposite? Are games primed to be a dark ride with a little player interaction such as waving a wii-mote at a target and pulling a trigger? What is more important for a game to be: something for the player to experience or something for player to conquer with skills?

I plan on playing and reviewing all four of these titles this month, so play them yourselves and let's talk about them!

Posted by Killer Moth at 7:31 AM No comments: Links to this post