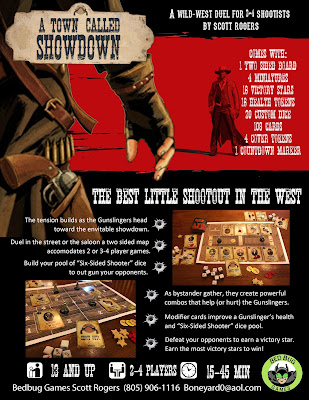 The wild-west town of Showdown holds an annual shootist competition - luring the fastest guns in the west. When the six-shooters go off, which gunslinger will be left standing?

A Town Called Showdown is a card and dice game for two to four players. Steeped in theme, tension builds as the gunslingers either pace their way down a street (two player) or in a saloon (3-4 player).

Based on the tension level, Players can play from their hand of five cards. Gear up with weapons and health that give your gunslinger the edge when the shoot-out happens. Bystander cards are played as they gather in anticipation of the shoot-out; some are there to help the gunslingers by adding bonuses and dice to their pool, others to hinder by removing benefits or changing die results.

When the eventual shootout happens, players fire using their "six-sided shooter" dice - adding and subtracting for bonuses from bystanders and modifiers. Hit your opponent enough times to remove him or her from the competition.

Gun down an opponent to earn a victory star. The player with the most victory stars at the end of three shoot-outs is the winner! 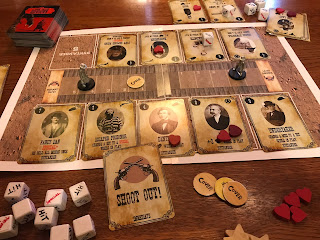 The Street for 2 players 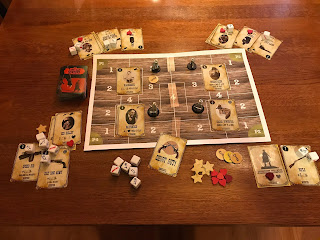 The Saloon for 2-4 players

Posted by Killer Moth at 9:37 AM No comments: Links to this post