This has nothing to do with game design, but...

As many of you know from this year's GDC talk, I like Disneyland.

I won't embarass myself by telling you how many times I've been to the Magic Kingdom this summer alone (more than most people go in their lifetimes) but tomorrow I go for a special reason. It is the (un) official 40th anniversary of my favorite attraction: the Haunted Mansion. 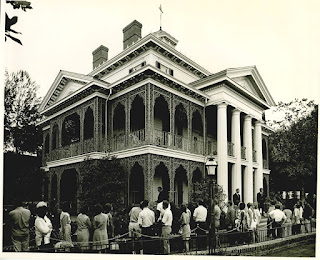 Built in 1964 and finally "populated" by ghosts in 1969, the Haunted Mansion is the easily (IMHO) the world's best dark ride. It serves as a constant inspiration to me as a game designer - the way it uses space, sound, lighting and simple but effective effects to bring its 999 grim grinning ghosts to life. But my favorite phantom isn't even in the ride. 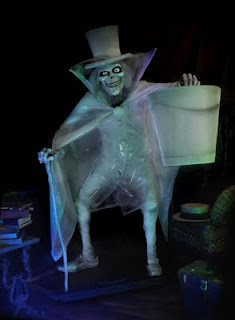 This the infamous Hatbox Ghost. This fine fellow appeared only for the first month of the ride's life and was quickly taken down because his effect - which gave the appearance of his head disappearing from his body and appearing in the hatbox - never worked correctly. Here's what he looked like... actaully, this is a full-sized reproduction - an item you can bid on at the upcoming D23 expo - isn't it gorgeous? If only I had the money and space...

Anyway, rumor has it that the Hatbox Ghost will be returning to the Haunted Mansion during the 40th celebration. Well, I just can't missing welcoming the old boy home if it is true. So tomorrow night at midnight, I will be crusing along in a doombuggy, hoping to catch sight of a hatbox clutching ghost. 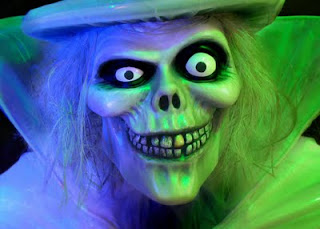