I Think I've Found My Limit For Video Game Violence 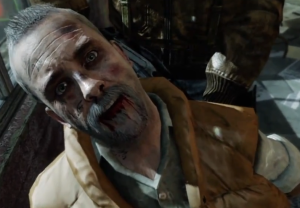 SPOILER ALERT - if you haven't played Call Of Duty: Black Ops yet, you might not want to read this - despite the following, I do recommend the game - it is a highly polished, exciting experience... with one exception.

In COD: BO you play a black ops agent who participates in many "wetwork" missions over the years starting in 1960's Communist Cuba and going through Viet Nam and beyond (I haven't finished the game at this time of writing)

At the start of the game, the player is offered an opportunity to skip "graphically violent" sequences. In the previous COD game (Call Of Duty: Modern Warfare 2) this sequence had the player cast as a (ANOTHER SPOILER) undercover agent who participates in a terrorist attack on an airport. The player is given the option to gun down innocent civilians who flee in terror and beg for their lives.

Or the player could also choose to not gun down the innocents and just follow along with the terrorists as they did their dirty work. Either way, the story still progressed, but the player could choose to opt out of the violence - kind of the gaming equivalent of being a "conscientious objector."

COD:BO does has the same start of game prompt, but this time the violent act was so odious I was actually stunned by it. In it, the player is told to smash a glass window. Which I did. Then the character puts a pieces of broken glass into the mouth of an interrogation victim and is prompted to punch the victim in the mouth.

Now, I understand the place of violence in games. I've found myself defending the use of violence in games on several occasions. To confess, I had no problem gunning down the victims in COD:MW2. But this torture sequence felt so gratuitous, so wrong, that I couldn't bring myself to press the button.

After a few seconds, the game went ahead and punched the victim for me (not once but twice) so the story could continue, but it left me feeling really bad.

Bad about being given the option to do such a heinous act (no more heinous than gunning down hundreds of enemy soldiers I suppose but in a shooter, that's part of the territory), bad about my character who I had perceived as a "good guy" up until this point and bad for the state of gaming in general. That this is what it takes to get attention in games these days. As much as I respect the Treyarch design team's work, this sequence just felt like it went too far and left a bad taste in my mouth. (no pun intended)

Like I said before, COD:BO is a great game. It is definitely worth your play time. It's well designed, very exciting, very cinematic. The controls are great and the camera is great. It's an admirable effort, especially considering what the company went through earlier this year.

But it didn't need a torture scene to be a great game. And it's sad the team didn't realize that.
Posted by Killer Moth at 10:40 AM 1 comment: Links to this post