"A game by Scott Rogers" 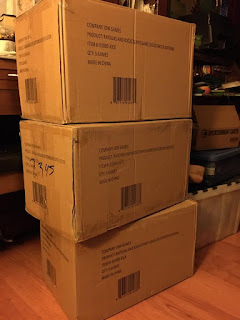 Like most of you, I have been eagerly awaiting the release of Rayguns and Rocketships. I have been hearing reports of the game showing up in Australia, New South Wales and even one store in Seattle. It's been very exciting to track the game as it is released around the world.

The day has finally arrived and my copies of the game were delivered from IDW games. I came home to a huge stack of games. Needless to say, IDW did a beautiful job not only producing the game, but shipping it and it was very exciting to receive my shipment. 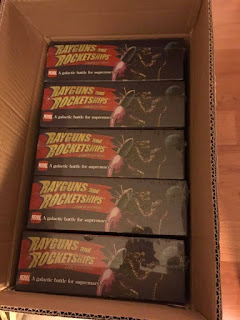 Receiving the final retail version of Rayguns and Rocketships marks a milestone for me. You see, for 22 years, I've been fortunate enough to say that my career is "game designer". I've helped design more than 50 published games and have been involved making even more that were never published. 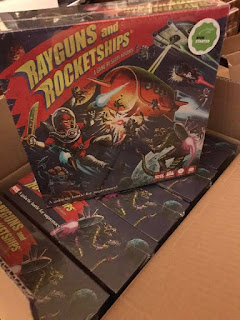 But Rayguns and Rocketships is the first game I've created that has my name on the cover. Outside of the board gaming world, it's actually a very rare thing for a game designer to receive this honor. I can only think of a handful of video game creators who have earned this honor.

It is far more common in the board gaming industry and while it might not seem like a huge thing, it represents something all game designers deserve - credit for their hard work.

There have been too many moments over my career where I have seen other people take credit for someone else's work or someone has tried to take credit for my work. Once a game looks like it is going to be successful, people get weird and start trying to "credit grab" - as if having their name on a box cover or on the game screen will justify their involvement - no matter how slight it was.

The "problem" is that credit does have power.  A credit isn't about ego or bragging rights, well, not for everyone. What it represent, to me, is proof to the world that this specific creator is responsible for the work. Names become a "proof of quality". Walt Disney. Stephen King. Oprah Winfrey. David Bowie. People buy their products because they recognize the names and associate the names with good work. There is a saying in the entertainment industry: "you are only as good as your last credit" and kids, credits are everything in this business.

In the early 90's, many of my peers were getting their names on the covers of their games. You probably have heard of some of them: Sid Meier, Tim Schafer, Will Wright, Chris Roberts, Chris Taylor. While literally thousands of people have toiled away on games, almost none of them get the credit they deserve. Did you know that Shigeru Miyamoto, the father of Mario and creator of the platfoming genre, who has made some of the best selling games ever made, has NEVER has his name on the cover of any of his games? Would a screenplay writer or a novelist put up with that? No way.  I can tell people that I've worked on this AAA game or that top-selling game, but if my name ain't in the credits, there's no way to prove that I was even involved.

Personally, I think it's time to correct this injustice. I've always said that if there were a reason for the video game industry to unionize, it would be for credit arbitration - something that's a big deal in the movie industry. I've left jobs before over this issue; it's that important to me. 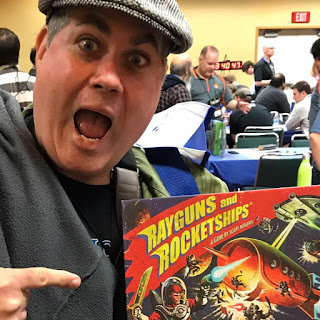 So, this one is for you, my fellow game designers, wherever you are. May you share the same good fortune as I have had and get the credit you finally deserve. 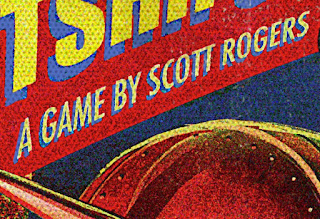 Posted by Killer Moth at 7:29 AM No comments: Links to this post