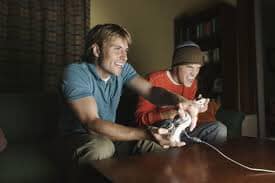 I often wonder “why don’t board games sell like video games?” Now, I know that there have been a few tabletop games that have sold a million or more copies (many of the ones that have, took decades to do so) but none of them sell with the speed that video games do. Why not?

You just have to look at the success of board games in retail spaces like Barnes and Noble – and the decline of their movie section – to see this in action. However, I think there is something else going on and it has to do with each media’s respective audiences. In terms of attention span and temperament, these audiences for these media are very different. Each media has several factors that appeal to or turn off an audience. I call these factors the barriers to entry. Movies and video games have a “low” barrier to entry while books and board games have a “higher” barrier to entry.

Let’s look at the barrier of entry to watch a movie. A movie viewer needs the time (roughly 90-120 min) and money (or access if we including today’s streaming services) to watch the movie. If you want to be pedantic, you can include attention span to that. However, once the movie has started, the audience member’s gratification can be almost immediate. Remember back to the first time you saw Star Wars (Star Wars: Episode IV: A New Hope to those of you who didn’t watch it in 1977) and when that Star Destroyer can rumbling by. I don’t know about you but I was enthrall from that opening scene. Immediate gratification.

The barrier of entry to video games is higher than a movie’s but the time to gratification can be the same. Audience members require (if they are playing a console game) the money for the game system (several hundred dollars) and the software ($40-60), the ability/dexterity to play the game (which can often be a factor is why someone doesn’t play or finish a game) and, of course, the time to play the game (the average is 6 – 20 hours) – however, if you are playing a mobile game then the time commitment is much, much shorter: closer to minutes than hours. However, players put up with these factored because, just like movie audiences, a video game player can get almost immediate gratification from playing a game.

The book reader’s barrier of entry is almost the opposite to a movie/video game. The product is far less expensive than video games (closer in the case of a movie) but the time commitment can be considerably longer (depending on the length of the book) and, more importantly, requires constant engagement from the reader. Unlike movies – which is a completely passive experience, if book readers stop reader, the experience stops. The same is true for many video games, but it is possible to “play” a video game absent-mindedly. Another barrier to entry is that book readers have to make their engagement in the content based solely on faith. Movies and video games have trailers – it is easy for audiences to make a decision to engage in the content based solely on the trailer. With a book, there’s the cover and, if you are willing, you might read a few pages in the store or on-line. There’s a reason that the saying “you can’t judge a book by its cover” exists!

Gratification for book readers is much more delayed than a movie or a video game - sometimes substantially- often a reader might have to finish a book before they know whether they liked it. Or in my own experience, it might require revisiting to form an opinion.
The barrier of entry for tabletop gaming requires more money than a book (of course, this depends on the game. A game like The Mind is only $9.99 at Target, while Mansions of Madness costs $99.99), and require the same level of trust as a book reader to discover whether a game is “good” or not. The maxim “You can’t judge a book by its cover” applies to board games as well and you can watch all of the “watch it played” videos you’d like - but just like a video game - you just won’t know whether you like a tabletop game until you play it. The forums of BoardGameGeek.Com are littered with reviews stating “I thought I’d like this more.”

As with video games, the time commitment for tabletop games varies – minutes to hours – but modern hobbyist games often trend towards hours. And don’t get me started on campaign games like Gloomhaven, Kingdom Death: Monster and Dungeons and Dragons. (I have a friend who has been playing the same D&D campaign for decades!)

Of all of the entertainment mediums, the game rules offer the highest barrier of entry. Designer Rob Daviau has noted that “the best moment of owning a game is when you open the box and the worst moment is when you read the rules.” I don’t know about you but there have been many times where I have read the rules to a game, thought I understood how to play it and still “played it wrong”?).

Finally, there is one last barrier of entry to tabletop gaming: other people. Most games require other players to even engage – all other forms of media we’ve discussed are solitary – and it can be challenging, if not difficult to gather the players necessary to play a tabletop game. This is one of the reasons why I think “solo modes” have taken off in board gaming.

The best games that you* haven't played

Design 100 recently asked other game designers what their "hidden gem" games were, but since no one ever asks me anything, I thought I'd create my own list of games you* haven't played: 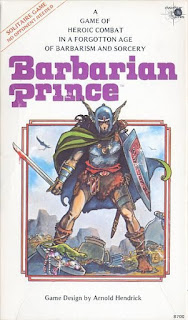 1. Barbarian Prince by Arnold Hendrick. One of the first "storybook" style games, Barbarian Prince was a sword and sorcery adventure that you could play by yourself. The prince travels a large map encountering monsters and beasts, while looting tombs and wizard towers. Long out of print, Barbarian Prince is available via Print and Play. 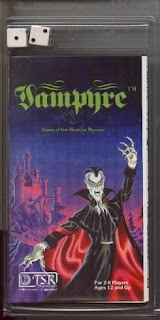 2. Vampyre by Phillip Shreffler is the pre-cursor to games like Fury of Dracula and Chill: Blackmoor Manor. A part of TSR's (awesome) micro-game line, this hunt and seek game is very faithful to Bram Stoker's Dracula and features great map and chit art by none other than comic artist/writer Bill Willingham. 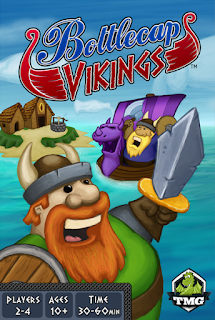 3. Bottlecap Vikings by Andy Van Zandt. I don't really care for Vikings as a theme (other than Raiders of the North Seas) but this little rondel based game is very charming and packs a lot of gameplay into a small package. 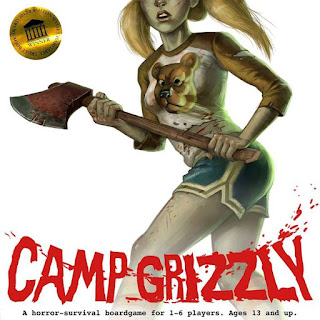 4. Camp Grizzly by Jason Topolski is one of the most thematic horror games I've ever played. From the fantastic card art by Austin Madison to the multiple endings, if you like 80's slasher movies, you'll find a lot to like in this game. 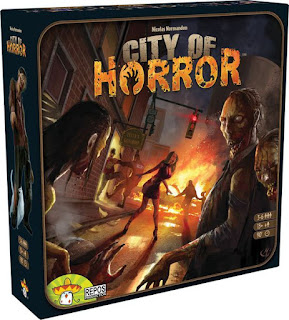 5. While City of Horror by Nicholas Normandon ends up getting lost among other zombie games like Dead of Winter and Zombicide, I believe it captures the genre better than those other games by focusing on that trope of the living dead genre: humans who act badly when faced with adversity. This unusual mix of area control and voting brings out the worst in humans, making the zombies end up looking downright civilized in comparison. 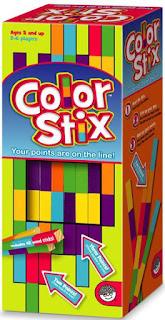 6. Overshadowed by its big brother Qwirkle, Color Stix, also by Susan McKinley-Ross, is a colorful, fast and simple game with surprising depth. Line up the colored stix to form as many matching sets as possible within a limited time. Sounds easy, but it is addictive and great fun. 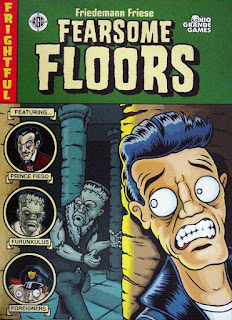 7. Fearsome Floors by Friedemann Friese is a wacky semi-cooperative game where players play a deadly game of hide and seek against a monster. The AI that drives the monster is quite robust despite its simplicity and the graphics by Lars-Arne Kalusky are delightfully daffy. Watch out for the blood slick! 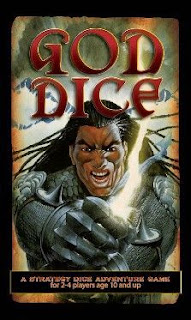 8. In God Dice by Rick Maxey, players are fantasy warriors in mortal combat. Roll dice to make combinations and unleash powerful attacks. A simple game with surprisingly deep strategy is worth tracking down. 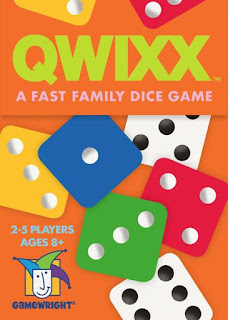 9. Qwixx by Stephen Bennedorf is the classic roll and write. Everyone gets to participate, even when it's not their turn. The dice selection mechanic is simple but filled with great choices. 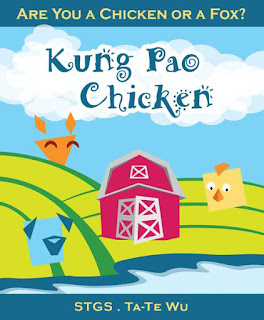 10. Kung Pao Chicken by Ta-Te Wu is a great alternative to Werewolf.  Players guess to whether a player is a chicken or a fox but the hilarity this game generates is a testament to its deceptively simple design.

* probably
Posted by Killer Moth at 3:44 PM No comments: Links to this post