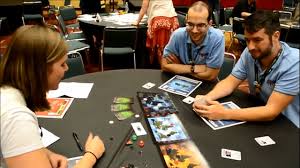 Let's talk about an interesting event that is happening within the board gaming industry: Publisher Speed Dating. These are events where about 15 game designers meet with 15 tabletop game publishers and have five minutes to pitch them each of them their board games. It's been a very popular event held at many gaming conventions around the country.

I, personally, have submitted to two speed dating events so far. My games haven't been picked for either of them, but I have come away with some valuable lessons I'd like to share with you:
1) Your sell-sheet matters. A sell-sheet is a single sheet designed to get publishers interested in your game. It should have the name of your game and a brief description of your game play, a list of components, the age, playing time and # of players and several reasons why your game is so great (I find bullet-points work best) - a compelling image to convey your theme and an image of your game "in action" also help. Contact info should always be on a sell-sheet. My first sell-sheet was light on the game play elements and I believe they are the most important. Don't worry about story or your finely crafted universe. Concentrate on the game play. Also, even though I didn't get in to the event, I did have a sell-sheet that I could show to other publishers and get them interested in my game. 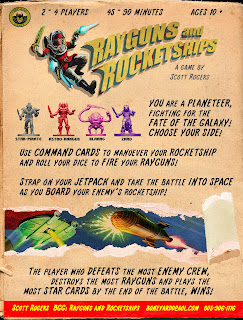 This Rayguns and Rocketships sell-sheet didn't have enough information on it about the game, the components or anything to get the publisher excited about my game.
2) The type of game matters. The last time I submitted to a speed dating event, I was told my game didn't get picked was because it was a two-player game and publishers weren't interested in two-player games. Therefore, find out what people are publishing and cater to that. I have been told that Deck-builders aren't very popular any more and it feels like the average consumer is getting burnt out on social deduction games. Miniature games can be very expensive to produce. Now,  I'm not saying don't make a game you aren't interested in, but it's always better to do your homework and find out what is appealing to the market. 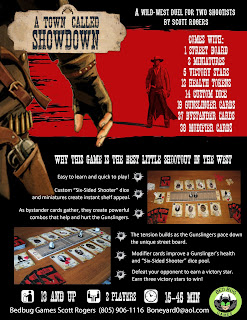 While I feel this sell-sheet is much better than the previous one, the selection committee didn't want to see a two-player game
3) Your game is look and feel complete. A speed dating event is the "last stop" for the game designer. The game you be presenting should be polished, play tested and (in my humble opinion) look great on the table. I know many game designers and publishers have different opinions on how polished a prototype game should look, but from my experience, the publisher wants to see something they can visual as being a final product. The less work they have to do to get it out the door, the better. In reality, your games may still require final art, a better rule book, graphically designed cards, components, etc. but the impression you want to give is of a finished game.
4) Know your pitch and keep it short. See if you can make your game seem exciting even without the game being there. If you can get people to say "Oooh! That sounds like a game I want to play" even without showing them the game, then you have a strong start. The more you know about your game, the better, but you don't have to tell your audience everything about your game. Keep it short and sweet. There's a reason they call it an "elevator pitch" because you only have the time of an elevator ride to make it. You only get 5 minutes at a speed dating event. Make them count!
5) There are no guarantees. Even if you get in, it doesn't guarantee you'll get published. I have had several friends get into a speed dating event and meet interested publishers and others who have not. Don't get discouraged if you don't come away with a signed contract, because odds are, that won't happen. The best thing IMHO about the speed dating event is that it gets your face in front of a lot of publishers at once who recognize that you have a game good enough to be one of the finalists for the event. Sometimes it's an honor to just be nominated! Use this opportunity to make new contacts and keep in touch with them even if they don't want your game. This industry (hell, all industries) are about who you know.
6) Don't give up! I haven't gotten into two events but that isn't going to stop me from applying next year. I will have a new game and all of these lessons under my belt. Good luck with your own pitches and I hope to see you at the next publisher speed dating event!

Posted by Killer Moth at 11:53 AM 4 comments: Links to this post