More thoughts that relate to the Six Zones of Play: As I explore the dynamics between player and the game, their relationship to each other both in the physical space and the “play space” (what others call the magic circle”) the old hoary head of terminology raises itself to cause confusion.

I read in another thread this question: What is the proper order and classification for the player’s interactions in a game? What are these things called and in what order do they happen? Allow me to try to wrap my hands around this... As I believe that everything in a game should flow from the player and the player’s experience, terminology should as well. I created this “equation” that emanates from the physical space of a game: A digression: Years ago I gave talk about Level Design and Disneyland. In it, I make the observation that when Walt started planning the park people would ask “what’s going to be in it?” Walt would answer “I don’t know but it will be surrounded by a train.” By thinking about the whole form first, he could then narrow down what inside that space. Which then leads to how the guest would interact with that space. In that talk I came up with this formula:

I then contextualize this formula for creating levels in video games:

The flow is centered around the player’s introduction and interaction with the game. Interactions start big and then becomes individual and personalized. 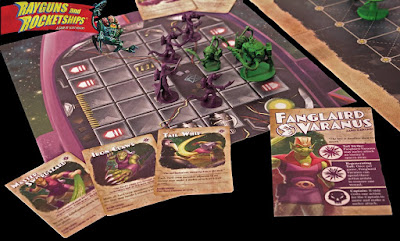 Flash forward to some confusion that arose during writing the rules for Rayguns and Rocketships. The game has an admittedly complex order of operations which could be confusing to some players not familiar with the game.

The writer of the rules had the same confusion as well. An order, which seemed clear to me, was clearly complex enough to warrant comment.

So to cleanly convey what was going on in the game, I once again created an equation:

GAME - The player's relationship to the entire game - How do I play? How do I interact with the game? (as well as Zone 0 concepts like what is the theme, the rules, what do I need to do to win?)

ROUND - In which all players get a turn. This includes actions such as "everyone is dealt a card" or "all players get X resources to begin or at the start of each turn" or "this condition is now in play".

TURN - In which a single player "takes their turn" - the turn is composed of phases and actions.

PHASE - The list of actions a player can do and the order in which they can be done.

ACTION - this is where the player does a specific action - a move action, a combat action, a buy action, a draw a card action, a pass action.

Some confusion can arise because the player never returns to the GAME state unless they start the game over again. Round, Turn, Phase and Action form a circle which loops for as many times as the game design dictates. (Dracula wins in 13 turns, each player plays 4 hands, etc.)

But notice how the priority of these focuses inward towards the player unlike the zones which emanate out from the player. By understanding the bigger picture first (the entire game, the train track that circles the park) we can then focus in on the details, adjusting and re-focusing until we reach the "atom" of play that comprises the entire game.

I find this perspective helps me understand games as a designer as well as a player.
Posted by Killer Moth at 11:40 AM