The Hunt for Sandwich Alpha!

Thanks to Kotaku, I discovered a hilarious site: The random video game name generator : http://www.norefuge.net/vgng/vgng.html
After playing with this for more time than I should have, I generated a list of truly awesome (and awful) names. The weird part is, some of these names sound like games I'd want to play (or in some cases, just real games):
Dracula's Battle Hell
Post-Apocalyptic Assault Overdrive
Ancient Dungeon from Planet X
National Lampoon's Submarine Slam
Indian Jetpack Battle
Disney's Cowboy Princess
Vampire Karate Maniac
No one can stop the Sword Machine
On the other hand, some of the randomly generated titles are just plain wacky:
Ultraviolent Amish Basketball
New Punching Strikes Back
Nasty Beast Park
God of Beach Jamboree
Papal Batman Brothers
Giant BMX of Love
Epic Hair Salon Gone Wild!
And one title was generated which could be chillingly accurate:
Indiana Jones and the Wheelchair of Magic (Harrison Ford is looking a little old)
Post your own random name results here!

The curse of the T-Shirt!! 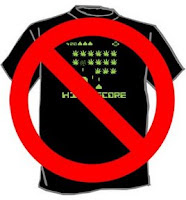 I know I'm superstitious when it comes to certain things, but one thing I DO KNOW is that you never ever want to make a T-shirt of your game while you are still in pre-production.
In fact, if I can control it, I will not let a team make the shirt until the first playable build has been created. I've run into this problem many times before and it seems to be a well-known but little talked-about phenomenon in the video game industry.
Share your tales of premature T-shirt tragedy here!
Posted by Scott Rogers at 7:51 AM No comments: Links to this post

Why video game sequels are good

I was recently talking with Chris Taylor of Gas Powered Games and he mentioned that he was really dismayed by seeing all of the "2's, 3's and etc's" on the cover of a gaming magazine. He said that he would rather see an original game than a sequel.

Now I would be inclined to agree with him - I prefer original games. I buy original games just to show my support of a new IP - some of my favorite games are titles like Psychonauts, Mad Maestro, No One Can Stop Mr. Domino, Professor Layton and the longest title ever but I have to admit, I have more than a fair share of sequels on my shelf as well. It's because of this...

I think I now have a good perspective on sequels now that I work for a publisher. Just like in Hollywood, they are "safe bets" - proven IPs that don't need to be explained to the audience - "if you loved the first one, you'll love the second." It's easy to understand why that is appealing but it also leads to some lazy marketing - since they feel that the popularity of the first game will result in "instant sales" for the sequel.

But the blame for the bad taste left in ones mouth for sequels shouldn't be squarely laid on the marketing department. Sequels sadly seem to be an opportunity for teams to "dial in" the gameplay and design. A sequel is an opportunity to get it right. For example, after finishing the first Maximo, I went to my producer with a list of 40 things I thought were broken and needed to be fixed in the sequel (to my amazement, I was able to get 39 of those requests fullfilled!) While the first game sold better, I still think the second game (Maximo vs. Army of Zin) is a better game. And we wouldn't have had the opportunity to make that better game if we didn't make the sequel.

Besides, if there were no sequels, there would be no Grand Theft Auto 3, Call of Duty 4, Burnout Paradise, Curse of Monkey Island, Resident Evil 2 or 4, Lego Star Wars original trilogy... you get the idea.

So, rather than this turning into another boring piece of someone's opinion, here are five pieces of advice on making a video game sequel:

2. Don't let the player down - they expect certain things in the sequel and you shouldn't disappoint - for example in Maximo vs. Army of Zin, we didn't realize that the players wanted to fight more supernatural enemies - we had them battling clockwork creatures instead. We let the fans down because we deviated away from what they liked in the first title.

3. Name it something other than "GameName 2" - Names are really important to a game. Personally, I think both the Batman (Batman Returns, Batman Begins, etc.) and the Indiana Jones (...and the) movie franchises did it right. Their titles are mysterious and keep furthering the fiction rather than reducing it to a numbered outing. Maybe I'd like the Final Fantasy series more if they named their games this way...

4. Always introduce something new. This may seem to be pandering to marketing, but make sure there are FIVE new things in your game for the back of the box, preferably new gameplay concepts to bring something fresh. Also, try to introduce at least one new hero and villain to the franchise. Remind the player that this is a new experience, not just a rehash.

5. See if you have the freedom to do something wildly different - This takes the buy in of your marketing department so it can be tricky to pull off. I've worked on franchises that were in their 5th, 8th or even 20th incarnation and sometimes a completely new direction is what it needs to shake things up. Give it a try, it worked for both the Grand Theft Auto and Castle Wolfenstein franchises!

I'm sure there's more but that's all I can think of for now. Good advice? Bad advice? I'm on crack? Let me know!
Posted by Scott Rogers at 10:46 PM 3 comments: Links to this post

I'm probably late to this party, but I recently discovered Jason Rohner's "game" Passage and I must say that it's a brilliant piece of work.
A metaphor for adult life, the player walks a 16-bit character (which reminded me of the Activision's Pitfall Harry) on a "life journey" - the first session I played, I walked straight ahead - got a wife (more on that in a second) and scored moderately high points-wise but encountered no treasure (which increases points) and no obstructions either. As I walked along, the area ahead of me (the future) was hazy and as the character aged, the future became clear but the past grew hazy. (It reminded me of a trip I had once when on 'shrooms, but that's a story for another time.) If you "go off the straight and narrow" you encounter treasure chests which can be full or (more often) contain nothing at all.
There are also obstacles which can be circumnavigated alone, but if you have a wife following you, there are many paths you cannot take - as a married man, I can tell you this was the most poignant aspect of the design - a mechanic never really done in games outside of Ico - and one that really brought home the whole theme of the game for me. I would love to see this design idea (caring for someone else) brought to more games - I'm beginning to feel that the era of the solitary hero against the world in games is almost dead.
I highly suggest everyone to experience Passage for yourself here.
Posted by Scott Rogers at 4:01 PM 2 comments: Links to this post